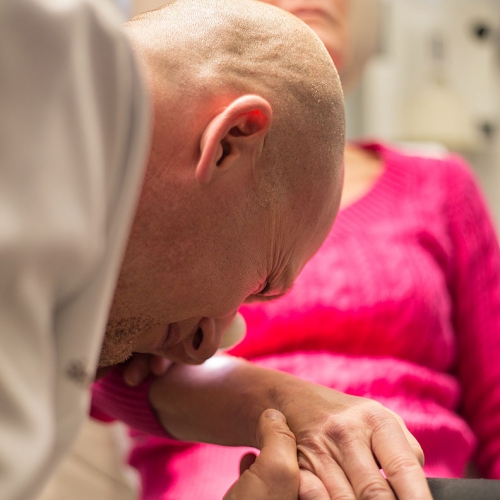 More common than you think.

Skin cancer is very common. With over 1.2 million new cases diagnosed every year it is the most frequently occurring type of cancer in the United States. One out of every 5 Americans will develop a skin cancer during their lifetime.

90% of non-melanoma skin cancer cases are directly related to one’s exposure to ultraviolet radiation from the sun. Five sunburns or one blistering sunburn doubles your chance of getting a skin cancer. Skin cancer risk can be greatly minimized with proper sun safety.

Self Exam is key to early diagnosis. 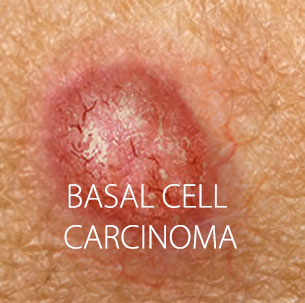 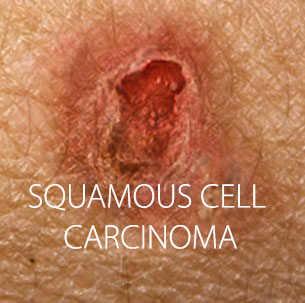 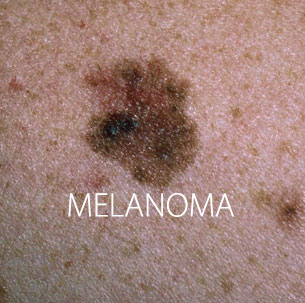 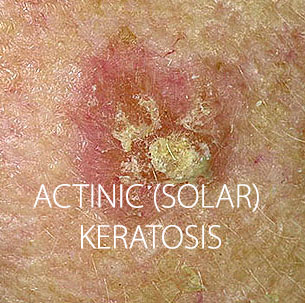 Basal cell carcinoma is the most common type of skin cancer affecting about one million Americans each year. These cancers grow from the basal cell layer of the skin, which line the deepest layer of the epidermis (the top layer of skin). It usually appears on areas excessively exposed to the sun such as the head and neck, but also has the potential to grow in areas that are rarely or never exposed. It generally presents as a sore that won’t heal or a pearly, shiny, fleshy bump or nodule that sometimes has small blood vessels within the affected area. The area may bleed with minor trauma.

Basal cells are easily treated in their early stages and do not progress to invade the blood stream except under extreme circumstances. They tend to grow quite slowly, however, they can invade and destroy the local area and cause deformity if left untreated.

Squamous Cell Carcinoma is the second most common type of skin cancer. It arises from squamous cells which form the outer layer of the epidermis (the top layer of skin). Squamous cell carcinoma can occur anywhere on the skin including mucous membranes and genitals but is most common on areas frequently exposed to the sun including the rim of the ear, lower lip, the face, bald scalp, neck, arms, hands and legs. It often appears as an opaque or red scaling patch or a firm bump in sun-exposed areas, and may be mistaken for a wart or patch of dry skin.

Unlike basal cell carcinoma, squamous cell carcinoma, if left to grow, can progress far enough to get into the lymph nodes and blood stream and become a threat to a patient’s life. This is more common in large, aggressive squamous cell carcinomas, cancers occurring on the ears, upper head, lips and genitalia or skin cancers that have been treated before, but have now come back. The overall chance of any squamous cell carcinoma spreading outside the local region is about 2%, but this can be much higher depending on the location of the cancerous site or other features. Therefore, it is important to get early treatment.

Melanoma is the most dangerous skin cancer and when advanced can cause extreme illness and even death. However, if caught early, it is almost always curable. Early staged melanoma is often referred to as “melanoma in situ” or “lentigo maligna”.

Melanoma begins in melanocytes, the cells throughout the skin that produce the pigment called melanin which makes the skin tan. Melanoma may appear suddenly or begin in or near an existing mole. Though melanoma may occur anywhere on your skin, melanoma is found most often on the legs of women or the backs of men. The two largest risk factors are sun exposure and heredity, but fortunately, it rarely occurs without warning. It is usually a brown to black lesion which is not uniform in border, color or surface. The “ABCDE’s of melanoma” have been described to help distinguish a regular mole from melanoma. The acronym stands for Asymmetry (most healthy moles are uniform), Border (irregular), Color (irregular or change in), Diameter (larger than a pencil eraser-not reliable), and Evolving (changing). Melanomas on chronically sun-damaged skin like the face may appear like a brown patch or freckle with irregular color.

Actinic (solar) keratosis is the most common type of pre-cancer. They are caused by chronic, cumulative sun exposure. Actinic keratosis looks like a scaly patch of dry skin, either flesh-colored or pink, which occurs on sun- exposed areas such as the head and neck, arms, chest and legs. Patients often describe a small area of dry skin that recurs in the same place after picking it off. Actinic keratoses should be treated early, as they may lead to squamous cell carcinoma.

Learn more about the ABCDE’s of melanoma

Regular skin self-examinations can help people detect these changes. When looking for a melanoma on the skin, it is helpful to apply the ABCDE rules:

A stands for ASYMMETRY; one half unlike the other half.
B stands for BORDER; irregular, scalloped or poorly defined border.
C stands for COLOR; varied from one area to another; shades of tan, brown, and black; sometimes white, red, or blue.
D stands for DIAMETER; melanomas are usually greater than 6mm (the size of a pencil eraser) when diagnosed, but they can be smaller.
E stands for EVOLVING; a mole or skin lesion that looks different from the rest or is changing in size, shape, or color.

During a skin self-examination, it is helpful to keep in mind that moles are generally uniform in color, round to oval in shape, and have a well-defined border. Melanomas tend to have one or more ABCDE traits; some have several ABCDE traits. Melanomas can vary greatly in appearance.

Self exam and early detection

Early detection is key. With early detection and proper treatment, the cure rate for BCC and SCC is about 95 percent. When melanoma is detected before it spreads, it also has a high cure rate. Regular skin exams help people find early skin cancers.

One type of skin exam is the skin self-exam. During a self-exam, people examine their own skin for signs of change. If a growth, mole, sore, or skin discoloration appears suddenly, or begins to change, see a dermatologist.

People who have spent time in the sun, have a family history of skin cancer (especially melanoma), have many moles or atypical moles, or have other risk factors for skin cancer should see a dermatologist for regular skin exams. Some people should have this exam once a year. Others need more frequent exams. A dermatologist will recommend the frequency that is best for each patient.

Learn how to perform a self-examination
Phone & Fax

We aren't available as of this moment, but you can send us an email and we'll get back to you ASAP. Thank you!